A setting of the Archbishop Rowan Williams' text 'Advent Calendar' for choir and organ. Commissioned for Liverpool Cathedral Advent 2010, by the Dean and family in gratitude to his mother, Lady Williams, after her 80th birthday. The anthem was first performed on the 28 November 2010 by the Choir of Liverpool Cathedral and was conducted by David Poulter. 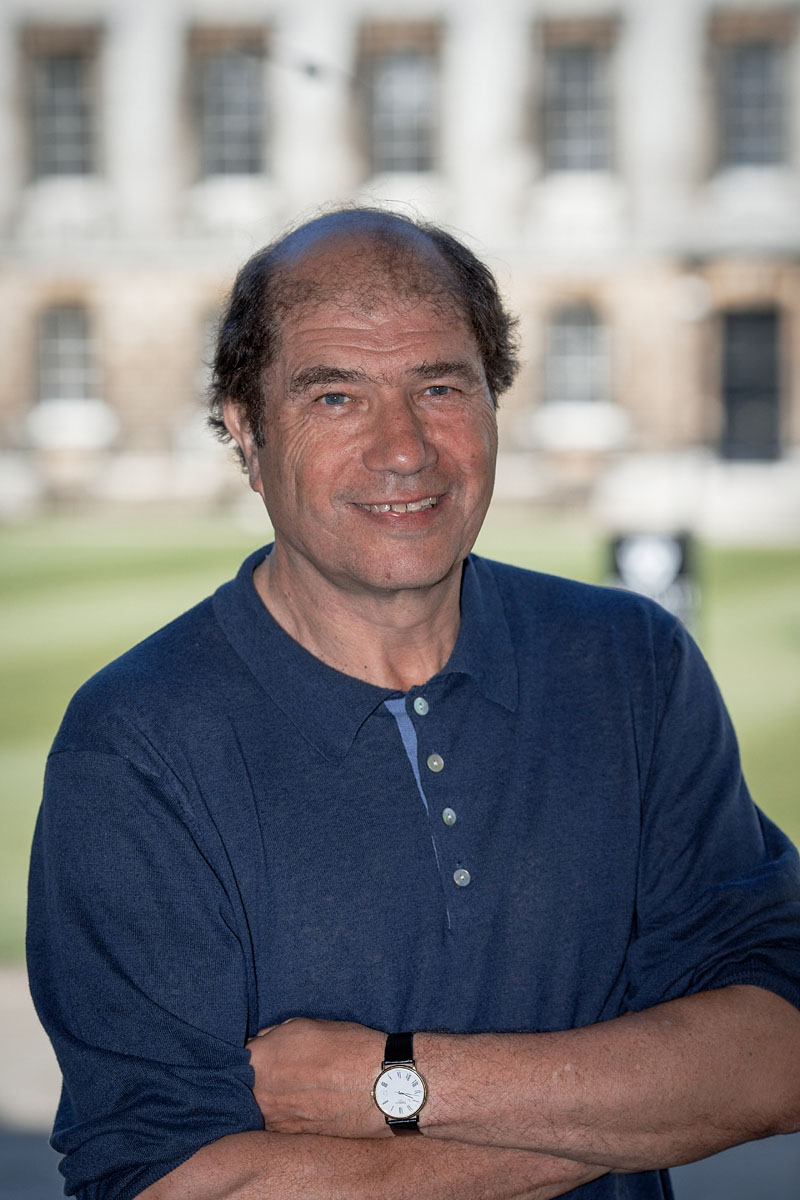 Michael Berkeley at King's College Cambridge (Photo: Historyworks)
"My composition for Cycle of Songs is called Build This House and was recorded by King's College Choristers. I scored the work to be accompanied by Primary School voices. I always enjoy finding new ways to make music and particularly with young singers. I have created a piece that will work in various contexts and with various forces. I love working at King's - great architecture and wonderful musicians.

"Not only was I a chorister but I have sung in choirs and was in the opera class at the Royal Academy of Music. I have written a lot of vocal music including three opera and a considerable amount of sacred music. With the Anthem Listen, listen O My Child, which was commissioned for the Enthronement of the Archbishop of Canterbury, I concentrated on paring things down and this new Anthem Build This House is modelled on a similar kind of skeleton.

"My music ranges from the simple to the complex and multi-layered but all of it, I hope, carries an emotional punch."

You can listen to Build This House, and learn about its historical context, here. 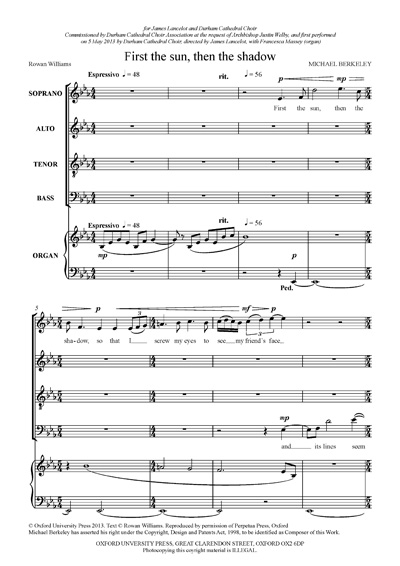 For SATB and organ
Published by Oxford University Press

First the sun, then the shadow is one of three Anthems directly related to Durham Cathedral and the present Archbishop of Canterbury, Justin Welby.

When he was Dean of Liverpool, Justin commissioned my Advent Anthem (to words by the then Archbishop of Canterbury, Rowan Williams) to celebrate the 80th birthday of his mother, Jane. It was subsequently sung by the Durham Cathedral Choir at Justin’s Enthronement as Bishop of Durham. As a result of this particularly fine performance, Durham commissioned me to set another Williams poem, Emmaus, which begins, “First the sun, then the shadow.” (Emmaus is the biblical village, the road to which is in itself a symbol of profound journeying.)

Before I could finish the composition the meteoric, indeed sun-like, rise of the new Bishop in the Anglican Church’s hierarchy overtook me, when Justin was appointed Archbishop of Canterbury in succession to Rowan Williams. Returning Justin’s compliment to Jane, his family asked me to write a short and simple Anthem (Listen, listen O my child to words from the Rule of St. Benedict) for the Enthronement in Canterbury Cathedral. This then preceded the first performance of the new Durham Anthem.

My association with Durham Cathedral has been a particularly happy one with the choir, directed by James Lancelot, recording the Advent Anthem and then taking to their hearts First the sun, then the shadow.

I was very struck by the musical contrasts that Rowan Williams conjures up in his poem Emmaus and its sense of mystery and awe: “We cannot learn this rhythm we are asked to walk.” In many ways it is not an easy poem to set but what I like as a composer is words that are elliptical, fleeting yet powerful. It’s why I have been drawn to Rilke in another recent work.

First the sun, then the shadow is also about sound, the hearing of sound, and there are many references that need, I think, an equally elusive musical treatment to complement the literary language.

Finally, I see in the words both great lyricism and moments of terrific climax, to which I hope I have added by taking the liberty of repeating that opening line like a mantra, a sudden blast of brilliant fortissimo light before the concluding recession into a relative and piano darkness:

In September 2017, the Society of Apothecaries of the City of London celebrates the 400th Anniversary of the granting of its Charter by King James I in 1617, which followed the separation of the Apothecaries from the Grocers’ Company. A central event in the celebrations is a special Evensong at St. Paul’s Cathedral for which the anthem 'Heare us, O Heare us, Lord' was specially commissioned. The text consists of verses from 'A Litany' by John Donne that have relevance to the work of apothecaries and physicians. It was probably written in 1609, shortly before Donne became Dean of St. Paul’s. The setting is by Michael Berkeley, one of the foremost composers of the present generation. The anthem therefore reflects the span of the Society’s four centuries. The music was specially written with the acoustic of St. Paul’s Cathedral in mind.

This anthem (for SATB and optional organ) was commissioned for the Enthronement of the 105th Archbishop of Canterbury, the Most Reverend and Right Honourable Justin Welby, and was first performed during the Enthronement ceremony at Canterbury Cathedral in March 2013. It sets a text from The Rule of St Benedict, translated by Michael Berkeley, counselling the recipient to 'receive willingly and carry out effectively your loving Father's advice'. The vocal lines are simple, flowing, and eminently singable, with alternating sections of unaccompanied chant and joyous outbursts from the full choir. The supportive organ part may be omitted if preferred.

This setting of the Te Deum was written for the Choir of Lincoln Cathedral Choir to commemorate the 800th anniversary of the signing of Magna Carta. It opens with a dialogue between the organ and strident unison choral lines, before moving on to the Sanctus, with alternating tutti and solo passages. Powerful choral lines and jubilant organ flourishes marry perfectly with the well-known text to result in a truly laudatory work.

Year of composition: 2018
Published by michaelberkeley.co.uk

Missa O Sacrum Convivium was first performed in Wells Cathedral on 14 October 2018 by Matthew Owens and his choir.

On 22 November 2017, the combined choirs of Westminster Cathedral, Westminster Abbey and St.Paul's Cathedral gave the first performance of this new motet commissioned for the occasion. The work is dedicated to the memory of John Tavener, a good friend and pupil of Lennox Berkeley. It references one of the harmonies in 'The Lamb'.

The Tale of Andrew

'The Tale of Andrew', set to words by Bishop Ken, tells how Andrew, a common fisherman, is touched by Jesus and dedicates his life to spreading the word and making converts. He is ultimately martyred for his pains but even on the cross he continues to preach.

St Andrew is the patron saint of Wells Cathedral. The work was premiered at Evensong in the Cathedral on Thursday 15th October 2015.

Michael Berkeley was commissioned to write the new Carol for 2016's Festival of Nine Lessons and Carols, broadcast around the world on Christmas Eve from King's College, Cambridge.

The anonymous C1400 text, This Endernight, is unusual for a carol in that it articulates the voice of the infant Jesus in dialogue with his mother. Ender or Endris means past or recent. Maternal feelings of tenderness are in abundance but there is also a knowingness about the importance of the event that is unfolding. It is an upbeat lullaby which looks forward to heavenly bliss and so culminates in a radiant cadence.