Michael Berkeley was born in 1948, the eldest son of the composer Sir Lennox Berkeley and a godson of Benjamin Britten. As a chorister at Westminster Cathedral, singing naturally played an important part in his early education. 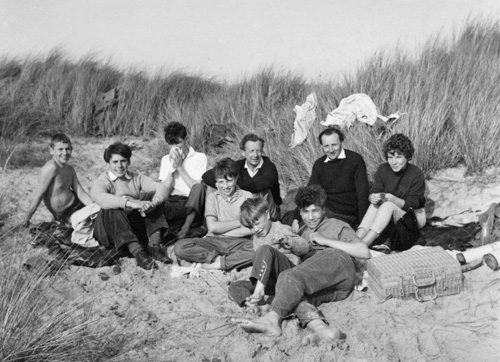 He studied composition, singing and piano at the Royal Academy of Music but it was not until his late twenties, when he went to study with Richard Rodney Bennett, that Berkeley began to concentrate exclusively on composing. In 1977 he was awarded the Guinness Prize for Composition; two years later he was appointed Associate Composer to the Scottish Chamber Orchestra. Since then Michael's music has been played all over the globe and by some of the world's finest musicians.

Major works of the 1980s include Gregorian Variations conducted in England and America by Andre Previn; the 1982 oratorio Or Shall We Die? to a text specially written by Ian McEwan, and made into a remarkable film for Channel 4 by Richard Eyre; For the Savage Messiah, Songs of Awakening Love, composed for Heather Harper and performed at the 1988 Proms; the Concerto for Organ; Keening for the saxophonist John Harle; Fierce Tears I and Fierce Tears II for the oboist Nicholas Daniel; the Quartet Study and the two pieces for strings, Coronach and Gethsemane Fragment.

The 1990s began with the powerful and expressionist Concerto for Clarinet at the Huddersfield Festival while Michael's first opera, Baa Baa Black Sheep, based on the childhood of Rudyard Kipling, with a libretto by David Malouf, was premièred at the Cheltenham Festival to enormous public and critical acclaim in 1993. It was subsequently broadcast by BBC radio and television and recorded on CD for Chandos. The London Symphony Orchestra under Sir Colin Davis premièred and took on tour Secret Garden and then in August 1998, Michael's The Garden of Earthly Delights, a BBC Proms commission, was premièred by the National Youth Orchestra of Great Britain under Mstislav Rostropovich.

Michael has written incidental music for radio and three film scores: Captive (1986), starring Oliver Reed and Irina Brook, directed by Paul Mayersberg for which Michael collaborated with The Edge of U2; Goldeneye (1991) - a dramatised life of Ian Fleming starring Charles Dance and directed by Don Boyd and another Don Boyd film, Twenty One (1991) starring Patsy Kensit and Rufus Sewell.

As part of Berkeley's tenure as Composer in Association to the BBC National Orchestra of Wales he was commissioned to write three new works, and the second, the Concerto for Orchestra, was premièred at the 2005 Proms. This piece, as with most of Michael's significant orchestral work, much of his chamber music and his operas, is available on CD as part of the Chandos Berkeley Edition. His final commission for the National Orchestra of Wales was for chorus and orchestra, a haunting lament written in memory of a young family friend, Gabriel Bailey, and Berkeley's long-time friend and collaborator, Richard Hickox. Gabriel's Lament memorably includes the singing of hump-back whales.

From 1995 to 2005 Michael was artistic director of the Cheltenham International Festival of Music, where he premiered over a hundred new works and initiated a policy of having a contemporary work in every programme. The scene was set by the world premiere of Thomas Ades’s Powder her Face and a chamber series featuring the work of Gyorg Kurtag. With Judith Weir and Anthony Payne, Berkeley jointly directed the Spitalfields Festival and he built the music programme for the Sydney Festival in Australia for three years at the beginning of the millenium.

Michael has, for several years, been the featured composer for the New York Philharmusica.

Berkeley's second opera, Jane Eyre, written to David Malouf's libretto, has been produced in the UK, Australia and America. His third opera, For You, was written to a libretto by Ian McEwan and commissioned by Music Theatre Wales. It was seen in a touring production in the UK and Italy 2010, and released on the Signum label.

In 2012, Michael composed his Oboe Quintet, Into the Ravine for Nicholas Daniel and the Carducci String Quartet. Also that year, he wrote Three Rilke Sonnets for Claire Booth and the Nash Ensemble, at the Wigmore Hall.

Michael was appointed a CBE for services to music in the Queen's Birthday Honours published on June 16 2012. In 2013, he was commissioned to write a new anthem, Listen, Listen, O My Child, for the Enthronement of the new Archbishop of Canterbury. This has fast become a classic of the choral repertoire, and was chosen by Justin Welby as one of his Desert Island Discs. That year also saw Three Cabaret Songs for Barbara Hannigan and Angela Hewitt, premiered at the Lake Trasimeno Festival in Italy.

In 2013 Michael was appointed a non-party political member of the House of Lords as Lord Berkeley of Knighton, CBE. He speaks as a passionate advocate for the arts, contemporary music and music education as well as taking up specific causes like FGM.

In the Royal Ballet's production Tetractys – The Art of Fugue, Michael collaborated with Resident Choreographer Wayne McGregor. This exhilarating fusion took place in February 2014 at the Royal Opera House. Michael's version of several movements from Bach's Art of Fugue uses a Mozart-sized orchestra with the piano taking a prominent solo role. In summer 2014, The Royal Ballet took the production to Moscow.

March 2014 saw the premiere of Clarion Call and Gallop. It was commissioned for the Berkeley Ensemble, who released a recording on their debut CD, Clarion Call.

April 2015 marked the 20th anniversary of one of Radio 3's most popular and successful programmes, Private Passions. The programme has included an extraordinarily constrasting list of guests, ranging from Isaiah Berlin to Stewart Copeland, the drummer of the Police, and from the Archbishop of Canterbury to John Bird and Stephen Fry. Private Passions won the Broadcasting Press Guild's Radio Programme of the Year Award in 1996. You can learn more on our Private Passions page.

As part of Magna Carta 800 Celebrations, Aric Prentice conducted the world premiere of Michael's composition Magna Carta Te Deum in Lincoln Cathedral in June 2015 in the presence of HRH The Princess Royal.

In 2015 Berkeley was the featured composer at the Ryedale Festival which commissioned At A Solemn Wake for the cellist Adrian Brendel and pianist Christopher Glynn. The work is dedicated to the memory of Berkeley's late wife, the literary agent Deborah Rogers who died in 2014, and suffused his subsequent Violin Concerto. The Concerto was premiered at the Royal Albert Hall on 27 July 2016 as part of the BBC Proms, performed by Chloë Hanslip and the BBC National Orchestra of Wales, conducted by Jac Van Steen. The work received unanimous critical acclaim.

Michael Berkeley was commissioned to write the new carol for 2016's Festival of Nine lessons and Carols at King’s College Cambridge which is broadcast around the world. It is a setting of the anonymous 14th Century poem This Endernight.