Written specially for the Berkeley Ensemble, Michael Berkeley's Clarion Call and Gallop was completed during the composer's residence at the Trasimeno Music Festival, Italy, in 2013. Whilst it is tempting, and not entirely misguided, to hear echoes of the work’s festive and sunny birthplace in the largely buoyant and high-spirited music, melodic elements of the piece are actually based on material taken from Berkeley’s anthem, Listen, Listen, O My Child, which was commissioned for the enthronement of the 105th Archbishop of Canterbury, the Most Reverend and Right Honourable Justin Welby.

The opening clarion call, using the anthem's leitmotif, quickly gives way, via tumbling figurations, to the gallop. Although initially well-behaved, instrumental high jinx invade, most notably from the clarinet, which for the first portion of the piece uses the raucous and high-pitched E-flat instrument.

After a brief return of the clarion call, the anthem material makes its most extended appearance before one final, frantic gallop to the finish, led by the viola and this time recalling the tarantella finale from the Sinfonietta of Berkeley's godfather, Benjamin Britten.

Writing to offer the Septet to his publisher, Beethoven drew attention to a noteworthy feature of its scoring: 'A septet per il violino, viola, violoncello, contra basso, clarinet, corno, fagotto - tutti obbligati (I cannot write anything that is not obbligato, for I came into the world to obbligato accompaniment.)' Despite the years separating Beethoven's work from these that followed, his example has held sway in that each uses its large performing forces to the full, even those where the original conception was a smaller work. The famous piano-vandal would surely approve of the diverse range of colours and effects that later composers have wrung from his original ensemble. It is a line-up that has proved surprisingly adaptable.

The first performance of this work was at St. John's Smith Square, London, 18 April 1991, conducted by Odaline de la Martinez

For the Savage Messiah

For the Savage Messiah was commissioned by the Schubert Ensemble of London with funds provided by the Arts Council of Great Britain.

The music begins with a large boulder of sound on the piano that triggers off a scrambling burst of notes on the other instruments, with whom it is frequently in conflict. As the composition developed I became more and more conscious of a very physical relationship with the music. I felt as I imagined a sculptor must feel, moulding and chipping away tangible textures, and at this point I reread H.S. Edes Savage Messiah - a remarkable portrait of Henri Gaudier-Brzeska, the French sculptor who died in the trenches in 1915 at the age of 24. The preceding years were filled with dynamic, not to say demonic, creativity, passionate love and tragedy. Gaudier added the Brzeska to his name having fallen in love with Sophie Brzeska, a disturbed Polish woman almost twice Gaudiers age, who died in an asylum in 1925. Their life in Paris and London was marked by extreme poverty and work of real brilliance. Gaudier was a fabulous draughtsman, but coupled to his delicate lines there seems to me a boulder-like massiveness born of frenetic energy. But it is perhaps most of all the awful inevitability of his life and the appalling waste at its ending that are echoed in the music. The boulder, like the Savage Messiah, is both the man and his destiny.

For piano, wind soloists and string trio
Year of composition: 2010

Michael, as one of a group of distinguished British composers who have worked closely with The Nash Ensemble over the years, contributed a 70th birthday tribute, Musical Chairs, to the Artistic Director of the Nash Ensemble, Amelia Friedman. It was premiered on November 21 2010 at the Wigmore Hall.

This little nocturne belongs to a group of early pieces written at the beginning of the eighties. The essence of the piece owes more to the sensations of Mediterranean nights than those closer to home. A dreamy mood pervades with only the occasional click of the cicada, a brief moment of passion and a final awakening snap interrupting an otherwise languorous evening.

Nocturne for Two Guitars and Ensemble

A complete re-working and re-orchestration of the slow movement of the Double Guitar Concerto. I have always felt that this movement had a curiously nocturnal feel with its sense of space and a suppressed drama that breaks through towards the end. With thanks to Roland Gallery for his editorial and guitar advice.

A short fanfare composed for the 2020 Presteigne Digital Festival. 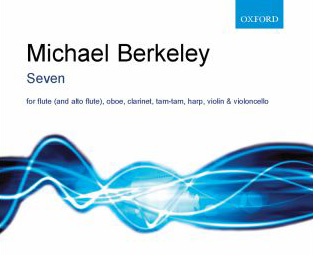 Seven is based on Second Still Life for oboe and harp, which Berkeley wrote for the 2007 Presteigne Festival. That work is founded in turn on a 'short and very spare' phrase which the composer remembered from his score for the 1986 feature film Captive . In the film it marked what the composer calls 'a moment of absolute but menacing tranquillity'; but in its new context, stripped of narrative, the music loses any sense of menace and rejoices in a meditative purity. Seven is the result of Berkeley's feeling that he could elaborate the material further and use contrasting voices, while still retaining an utter simplicity. As for the title, the work is for seven players - well, six and a mystery seventh; it lasts seven minutes; and it plays with the juxtaposition of seven characters and the way they can inflect lines with their own colour and individuality.

Shooting Stars is a complete re-write of a short piece called Hunt that I wrote for Tim Reynish and Sir John Manduell some ten years ago. I initially thought of calling it Dodgems since it has a feel of the fair ground, of bright lights and of being jostled. Near the end there is even that empty sensation of putting your foot down in a dodgem and finding the power has been momentarily cut off by all the pushing and shoving. I also recall childhood days in the shooting gallery when the targets where placed at the centre of a star. However as I was working on the music I witnessed the brief spark and flash of a shooting star flying across the night sky and, since this short piece for symphonic wind can act as a prelude to the more substantial Slow Dawn, I opted for the ambiguous, though related, title.

" 'Variations on Lovely Joan' is a gorgeous addition to the string orchestra repertoire, remarkably coherent given that it's written by eight composers. Based on an English folk song, the variations are full of character, from Michael Berkeley's frolics to Sally Beamish's rapt stillness." - Rebecca Franks, The Times, 30 August 2017