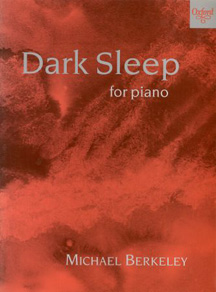 Dark Sleep lasts just under ten minutes and was commissioned by the BBC for the Fairest Isle celebration of Henry Purcell and Michael Tippett. It looks back, as though in some troubled dream, to fragments of Purcell and Tippett and was first performed by Peter Donohoe at Pebble Mill in January 1995.

The widely spaced opening notes, marked very slow and considered, are only much later re-ordered to reveal their genesis - Didos lament from Purcells Dido and Aeneas. This slow introduction is only eight bars old before the music breaks into a quick and relentlessly turbulent passage. A brief reference to the opening of Tippetts Fourth Symphony leads into a slower, more expressive section; a predominantly mysterious, even glassy sound world from which emerges the poignant notes of the lament, now at last momentarily in their correct juxtaposition. Finally, a tiny fragment of the music is spinned obsessively until it falls out of control and back into the carefully placed notes of the opening.

The genesis of this piece lies in a conversation I had with Clare Hammond in Cambridge when I told her that I would very much like to write some short fragmentary pieces for piano. Clare, a pianist I much admire, then asked George Vass to commission the music for the 2016 Presteigne Festival.

I have always liked the Japanese haiku for its brevity, its connection with nature and its economy of means.

From my study in the Welsh Marches I observe some wonderful birds and I got excited by the idea of depicting in short bursts of music not their sounds (who could compete with Messiaen in that arena) but their movement which endlessly fascinates and suggest music to me.

The brains of birds operate some 400 times faster than ours, hence their rapid response and synchronicity of movement.

These, often elliptical, fragments (and some are barely 30 seconds long) are also inspired in part by the very short pieces of Gyorg Kurtag where less always seems to result in more.

There are eight pieces and they can be played in any order, or even be individually extracted, but the order in which I wrote and printed them and which seems to make sense to me and to Clare is as follows:

1. Blackbird in birdbath. Sudden joyous cleaning of wings in water.

2. Red Kite, Languorous use of termals, floating and then suddenly darting as it spots potential meal.

4. French Partridge. I find these birds far more tentative, social and interesting than the rather boring and predictable pheasants with which I am inundated.

5. Goldfinches. Wherever there is spilt corn on the farm on which I live, swarms of brightly coloured Goldfinches congregate excitedly.

6. Blue Tits. This happy piece was written while on honeymoon in Venice, recalling the darting to and fro of blue tits from the silver birch and wiegelia back home.

7. Crows, Rooks and Ravens. The most ominous, dark and dangerous movement. There is something alarming about these birds and the way they will hover to take the eyes from fallen sheep.

8. Barn Owl. That beguiling, slow motion blink and then the effortless swoop on a possible mouse. The close of day and so to bed, or roost. 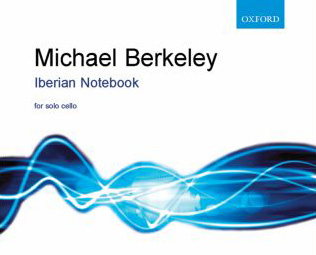 A suite in six movements for unaccompanied cello, inspired by the composer's travels in Spain, Portugal, and Morocco. It incorporates fragments of traditional melodies and the composer chose the cello as a suitable instrument to depict the heat, richness, and cruelty that are part of Spanish history. 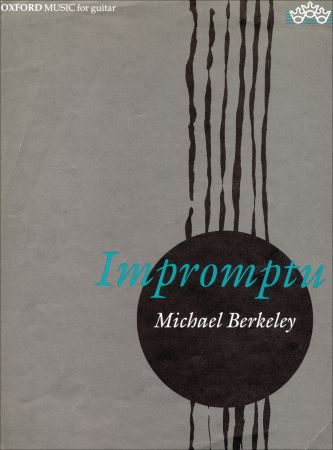 On the morning of 15 July 1983, Julian Bream asked me to a concert and party that evening to celebrate his 50th birthday. Unable to lay my hands on a suitable card or present, I decided to make one - Impromptu was the result. This little vignette which is based on the musical letters in Bream's name (B E and A) was first performed on Radio 3 in 1985 by Anthea Gifford. 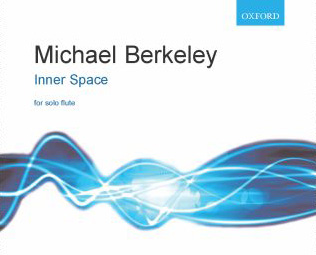 I wrote this solo flute piece for Janne Thomsen for the Holstebro Festival in Denmark, where she gave its world premiere in November 2006. We had been talking about a possible solo work ever since I composed Last Breath for flute and harp which she premiered at in Germany a couple of years ago. I like the sound of a solo flute as an extension of the human voice and its ability to be both soft and breathy as well as shrill and piercing.

The opening idea comes from a discarded early piece but I always remembered the wide intervals of the first few bars. Essentially these leaps are the basis for the lyrical music that is at the introspective heart of the work. That inner quest is emphasised by two contrasting and more virtuosic passages - a lilting 6/8 dance and, later a fast and furious race around the instrument which sounds rather like an insect trapped in a jar. The opening music returns at the end but now, in the light of what has transpired, finds its way to a peaceful conclusion.

'Insects' naturally follows on from the birds-inpired Haiku for piano. 'Insects' has been written for the harpsichordist, Mahan Esfahani, and receives its world premiere on Saturday 27 June 2020 at the Aldeburgh Festival.

Lullaby appears as one of 11 variations in Variations for Judith, a book of pieces for amateur pianists.

Judith Serota was Executive Director of the Spitalfields Festival in east London for nearly twenty years until late 2007. As a surprise leaving present to her, the then Artistic Director of the Festival, Diana Burrell, conceived the idea of assembling a set of piano pieces for her to play, and asked each of Spitalfields' former Artistic Directors to contribute a variation.

For viola
Year of composition: 1994
Published by Oxford University Press

This music was written in memory of a friend, Leley-Ann Sayers, who died suddenly in 2010. It was choreographed and danced by Melanie Clark for a memorial evening at Trinity Laban College where Lesley worked and where she was developing a project based on the Tchelichev designs for the Massine Ode for Dhiagilev. It was subsequently played as a concert piece at the memorial service for another great friend of mine, the writer and rock critic, Robert Sandall. The music is in a single movement and has several references to Bach's solo suites. The overwhelming atmosphere is reflective with a contrastingly animated passage.

The first public performance of Ode - In Memoriam was given by Gemma Rosefield as part of the Cheltenham International Festival of Music on Friday 1st July 2011, in St. Giles Church, Bredon. 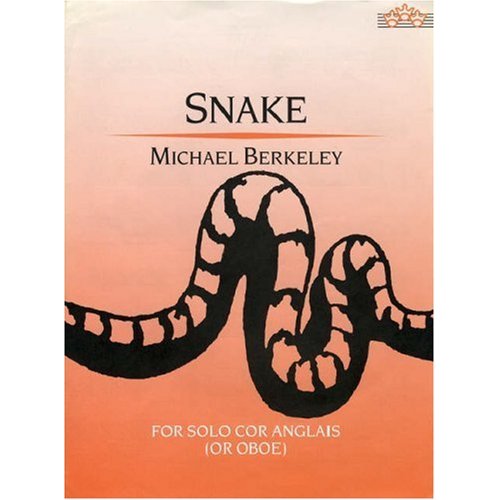 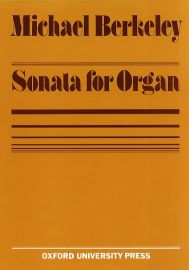 The first movement, Ricercare, is characterized by a passage of big chords after which the work moves into a gentler Intermezzo before the final busy and bustling Toccata conclusion.

Sonata in One Movement 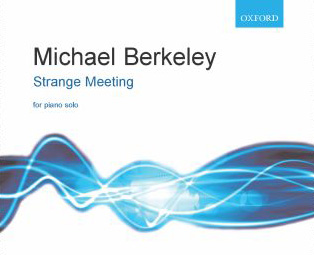 Strange Meeting was commissioned by Howard Shelley with funds provided by the Arts Council of Great Britain and first performed by him in Berlin in December 1978.

The work takes as its starting point Wilfred Owen's poem of the same name. The first movement was written five years earlier in 1973 and performed by Malcolm Williamson. Howard Shelley's request for a new piece gave me a welcome opportunity to revise the original movement and add two more.

The first depicts the 'strangeness' of the meeting "...Down some profound tunnel", and the second portrays the viciousness of war with violent, jabbing rhythms and this leads directly into a concluding chorale-like movement in which a kind of peace is attained, echoing the closing words of the poem "Let us sleep now..." 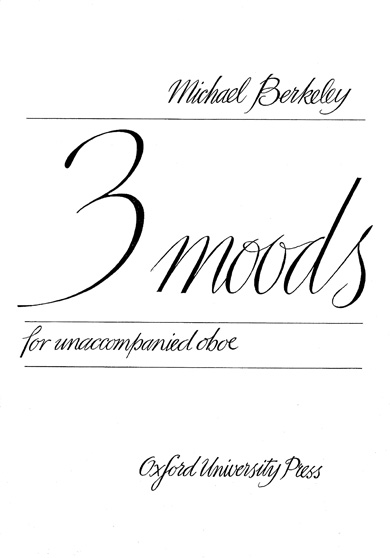 Three Moods for unaccompanied oboe were originally written for Janet Craxton who gave their first performance in Knighton in 1978. 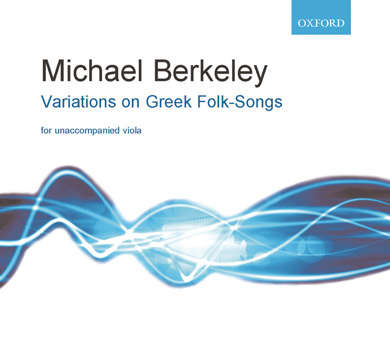 Variations on Greek Folk Songs were first performed in London at the Wigmore Hall by Susan Bicknell on 18 May 1981. The piece is a sympathetic glance at the Greek character and the variations take on a quasi-improvisatory feel. The piece lasts approximately 7 minutes.

Worry Beads was chosen as one of the set pieces at the first Maurizio Biasini International Classical Guitar Competition, held from October 10-16 2011 in Bologna, Italy.