The starting point for Magnetic Field was the string music of Purcell and in particular the Fantasia upon One Note. Here Purcell ingeniously finds the most exotic harmony imaginable with the repeated note always a natural or deliberately dissonant part of it.

This gave me the idea of seeing how, using contemporary techniques, I could use a single note – in this case F – as a kind of magnetic force around which everything else revolves. So the piece begins with the players attempting to move away from the F. At first this is in barely discernable quarter tones, rather like the plant's early effort to open its leaves and spread out from a central system which we can only fully appreciate through the medium of speeded up film. This leads into a sequence of frozen, widely spread chords, derived from the Lament in Purcell's Dido & Aeneas.

As the music becomes faster and more agitated, so the F casts its spell by its very absence. Only on its return does the music slim down and we are briefly back, for the close, in the tentative world of the opening. 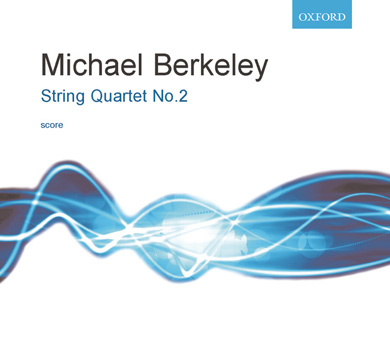 My second string quartet was written during the autumn of 1983, and is in one movement lasting a little over a quarter of an hour. It begins with a cello solo which, with the intervals created by the entries of viola and violins, form the basis of what is to follow.

I found myself at something of a musical crossroads before and during the composition of the quartet, but in the course of writing it, a new direction began to emerge. This utilises a freer, more random use of thematic material, and indeed, the final bars of the quartet dispense with barlines altogether, though the sound is always very carefully controlled. This last passage contrasts sharply with the central section of the work, which is tight and rhythmic. The quartet consists, therefore, of three interrelated and continuous sections.
The quartet was commissioned by the Merlin Music Society with assistance from the Welsh Arts Council. It was first performed by the Gabrieli String Quartet at a Merlin Music Society concert in Monmouth, on 15 January 1984.

Torque and Velocity is Michael Berkeley's fifth composition for string quartet. It was commissioned by the Cheltenham Music Society (with financial assistance from South West Arts) for the Takács Quartet, which gave it its first performance at the Pittville Pump Room in Cheltenham on 15 October 1997. Berkeley says that it was the Quartets special qualities of exhilarating vigour coupled to innate musicianship, as exemplified in their playing of the Bartók quartets, which helped dictate the nature of the piece.

Like Berkeley's previous string quartet, Magnetic Field of 1995, this work is in a single movement; and again it has a title derived from physics - torque being the rotary movement produced within an engine. The composer likens the opening gesture to the flicking of a switch which sets the piece in motion. It then accelerates through the gears, as it were, gradually building up increasing momentum with each change of tempo and texture. The energy thus generated throws off sparks in the form of vocal interjections; and at the climax precise pitches and rhythms are briefly abandoned in passages of freely co-ordinated manic, sawing glissandi. However, the works obsessive forward movement is interrupted from time to time by moments of stasis, with quiet, widely spaced chords and expressive fragments of melody. And one such quiet moment occurs at the end of the piece, before the final click of the switch.