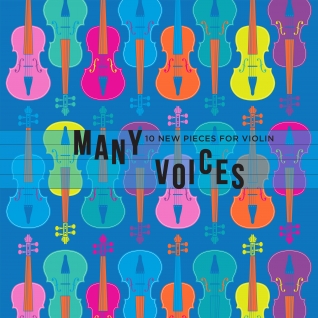 A Dark Waltz was commissioned by London Music Masters as part of their admirable scheme to commission contemporary works for students and children working their way through the first Violin Grade exams. This resonated with me since as a child I was infinitely grateful for Bartok’s Mikrokosmos for piano. My short waltz has a slightly valedictory feel to it and since its composition came shortly after the death of Sir John Manduell, who had done so much to improve musical education, I have dedicated it to his memory.

A Dark Waltz began life for the London Music Masters pieces for young string players which is why it was dedicated to the memory of a great music educationalist, Sir John Manduell. When I came to extend the music, first for John Turner (recorder) and string quartet, and then for Nicholas Daniel (oboe) and Julius Drake (piano), the effects of the coronavirus were beginning to take hold and I lost a close friend. Consequently the 'Valse Triste' nature of the music, with its simple melody, became increasingly sad and, at the close, angry.

The piece was originally composed in 2018, and the extended version premiered by Nicholas Daniel and Julius Drake at a concert in London's Wigmore Hall in June 2020.

A Mosaic for Father Popieluszko 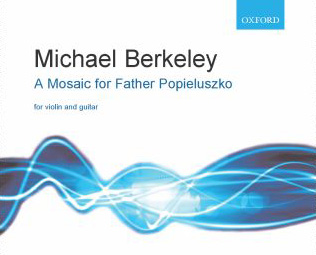 A Mosaic for Father Popieluszko

For violin and guitar
Published by Oxford University Press

For violin and guitar
Duration: 13 minutes
Year of composition: 1985

Michael Berkeley wrote Mosaic for Father Popieluszko for Jean-Jacques Kantorow and Anthea Gifford, who gave the first performance in 1985. The emotional impetus for this piece was the murder, in Poland the previous year, of the pro-Solidarity priest Father Jerzy Popieluszko. For Berkeley, the combination of grief and rage is potent, as can be heard in this angry, passionate piece in which there is much contrast between aggressive, violent sounds and soft, wounded ones. It is a memorial to someone who died an atrocious death quite needlessly. 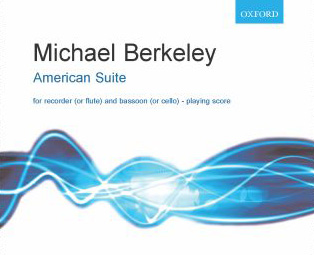 For recorder (or flute) and basoon (or cello)
Duration: 14 minutes

This charming work uses the format of a baroque dance suite for the basis of its structure. In six movements, its versatility reflects the style in which it is written.

At a Solemn Wake

Commissioned for the Ryedale Festival (where it received its world premiere in 2015), 'At a Solemn Wake' is a virtuosic single movement piece for cello and piano. It moves through a series of moods, from mysterious and atmospheric to turbulent and agitated, and takes full advantage of the range of timbral, rhythmic, and textural possibilities allowed by this combination of instruments. 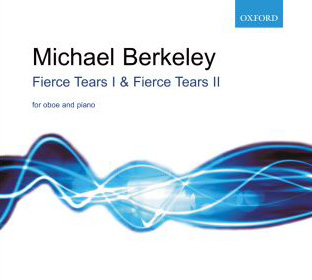 Fierce Tears I and II

For Oboe and Piano
Published by Oxford University Press

For oboe and piano
Year of composition: 1994

Fierce Tears I for oboe and piano explore the emotions of grief and anger following loss or bereavement. Fierce Tears I and Fierce Tears II both use a melodic line taken from Berkeley's Oboe Concerto, but it is developed in different ways in each work.

Fierce Tears I and II

For Oboe and Piano
Published by Oxford University Press

For oboe and piano
Year of composition: 1994

Fierce Tears II for oboe and piano explores the emotions of grief and anger following loss or bereavement. Fierce Tears I and Fierce Tears II both use a melodic line taken from Berkeley's Oboe Concerto, but it is developed in different ways in each work. 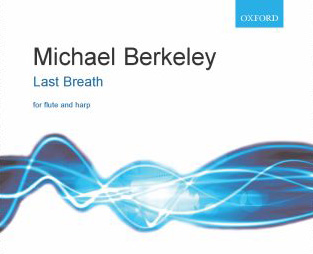 For flute and harp
Published by Oxford University Press

For flute and harp
Duration: 5 minutes
Year of composition: 2007

Last Breath alternates lyrical and attacking music but all derived from the tiny upward and downward interval of a minor second. This is to be found in a lot of my music and it probably dates back to my childhood days as a chorister at Westminster Cathedral and my utter immersion in Gregorian plainchant. I not only sang it day in and out, but when my voice broke accompanied it on the organ a particular knack since it has to be done entirely by ear. Last Breath has a slightly yearning sensiibility prompted perhaps by the breathiness of the flute and its closeness to the human voice. First performed by Janne Thomsen (flute) and Sarah O'Brien (harp) at the Musiktage Festival in Badenweiler, Germany in March 2005. 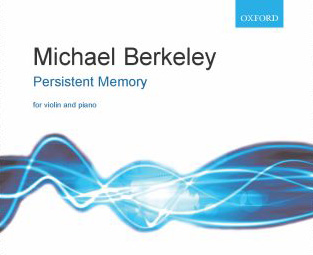 For violin and piano
Published by Oxford University Press

For violin and piano
Duration: 6 minutes

Persistent Memory is a little six minute drama commissioned for the 2004 Britten International Violin Competition. The title refers to a three-note motif in the Intermede movement of the Debussy Violin Sonata which I have always loved. This fragment obliquely informs the music as well as making more overt but fleeting appearances as the music unfolds.

Although the piano begins as the more aggressive partner and triggers the violin into animation, it is in fact the piano that finally provides a note of resolution, or, at least, partial resolution.

My Piano Trio was commissioned by the Luton Music Club as part of its 35th anniversary celebrations, with funds provided by the Eastern Arts Association. There are relatively few contemporary piano trios, so I was particularly glad to receive a commission which allowed me to explore this medium.

Unlike most of the classical trios, mine is in a single movement though it falls into three distinct sections; basically, fast-slow-fast. The piece opens with a solemn, scene-setting glissando across the bottom strings of the piano. I have occasionally used this harp-like technique to add a special colour rather than to play an important thematic role.

However, it does tend to appear at crucial moments in the work's development, which is fairly easy to follow since the first phrases on which everything else is based are simple and easily recognizable. The melodies tend to be modal and I have tried to marry them to a certain rhythmic impetuosity which, I hope, carries the music continuously forward. 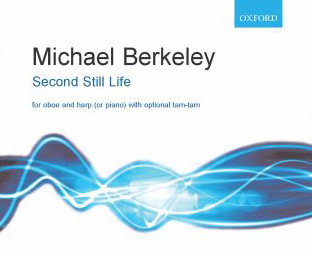 For oboe, harp and piano

In Second Still Life the play on the word second is, in fact, very apt. Not only is it scored for just two instruments but the interval of a second is explored throughout the piece, creating thematic and harmonic material from the most basic of motifs.The unusual scoring is an interesting feature of this work, using the particularly beautiful timbres of the harp and oboe to create a short, yet memorable study.

Sonata for Violin and Piano 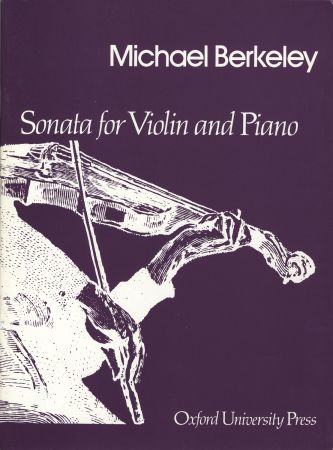 Sonata for Violin and Piano

For piano and violin
Duration: 23 minutes

My violin sonata was commissioned by Alun Hoddinott for the Cardiff Festival of Music with funds provided by the Welsh Arts Council and first performed by Yfrah Neaman and Martin Jones on 4 December 1979.

The work is in three movements - the first is fast and aggressive and is based on a sequence that appears throughout the rest of the piece. The second movement is, by contrast, slow and would see to have been bruised by the first. The final movement renews the aggressive vehemence of the opening and grimly combines it with material from the slow movement. The work has, therefore, an A B A pattern.

This is an arrangement of Touch Light, which is a homage to the masters of early opera - Monteverdi, Handel, and Purcell. The soprano and counter-tenor solo lines from the original version are re-worked here for flute and violin.

The idea of writing a duet for soprano and counter-tenor immediately put me in mind of Monteverdi and Handel but when I looked more closely at the scores, the texts (and music) they employed for rapturous moments can usually be boiled down to a very simple language - a caro mio or mi tesoro. In other words it was going to be hard to find a text or a poem that was sufficiently spare and that would offer opportunities for two voices. So I decided to distil the essence of some of these ecstatic moments into my own words and also employed a variation on the ground bass which lies at the heart of some of my favourite arias and duets - Dido's Lament by Purcell or the final great duet from Poppea by Monteverdi. Touch Light is, then, a homage to these masters of early opera and though originally envisaged with a counter tenor and soprano it is not exclusive to these voices.

Touch Light was commissioned for the 2005 Tetbury Music Festival to celebrate the marriage of Katie Smith and Jonnie Wake, and first performed by the Kings Consort, Lorna Anderson and Robin Blaze, directed by Robert King. 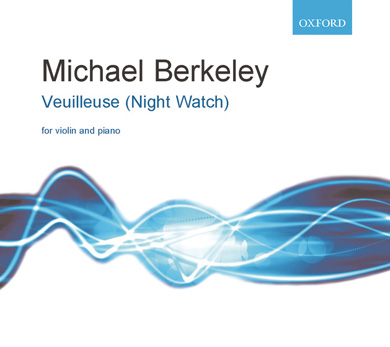 For violin and piano
Duration: 10 minutes

In 1997 I was asked to write a piece for violin and piano for the Belgrade Festival. Not having enough time to embark on anything new, I seized the opportunity to extract the one part of an early violin sonata that I still liked, and reworked it.

Essentially this is the slow movement of my 1979 Violin Sonata, but now incorporating some thematically related music from the last movement. The original material that has been retained also includes a melodic idea from my earliest published score, Meditations for string orchestra, which embraces the same, largely tonal, harmonic landscape. Veilleuse means Night Watch or Night Lantern, and the music has a slightly melancholy, restless atmosphere, which momentarily erupts in a passionate outburst before settling back to the quietly ticking, veiled lines of the opening.