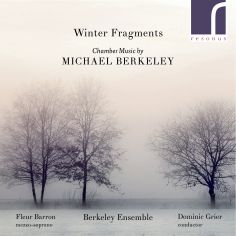 In Berkeley's 70th birthday year comes an attractive disc of five chamber pieces, performed by the eponymous ensemble dedicated to his music and that of his father, Lennox. These range from the 1983 Clarinet Quintet, with its medieval-pastoral strain, to an impassioned Rilke sonnet setting for mezzo-soprano and cello: Barron compels here and in the seven Winter Fragments (1996). The wind quintet Catch Me If You Can (1994) makes a spruce opener.

The Clarinet Quintet (1983) is spun from sinewy, twisting strands contrasting the playful impetuosity and dark-hued luminosity of John Slackâ€™s clarinet to end in a moment of sublimely subdued beauty.

The Berkeley Ensemble, conducted by Dominic Grier and dedicated to music of the 20th and 21st centuries, provides endlessly responsive playing, whether alone or as part of the Winter Fragments song cycle, sung by Fleur Barron, who is also exceptional in the Sonnet for Orpheus (from Three Rilke Sonnets).

Even when working with large-scale forces such as opera and music theatre, Michael Berkeley's style and expression remain attuned to the more intimate nuances of chamber music. Perhaps this is because the chamber context provides such an effective vehicle for one of his music's most distinctive features - the often dichotomous interplay between the individual and the group... the Berkeley Ensemble, directed by Dominic Grier, are excellent throughout - entirely at one with the music of their namesake composer.

Clarion Call and Gallop is 'high spirited and buoyant piece'

Reviews of digital download from Resonus Classics (catalogue no. RES10127) 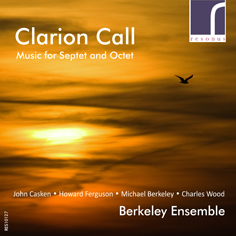 Clarion Call opens with the newest work, Michael Berkeley's 2013 Clarion Call and Gallop for septet which was written specially for the Berkeley Ensemble. It was written during the composer's residency at the Trasimeno Music Festival in Italy. A high spirited and buoyant piece, it has a very distinctive texture with much high clarinet writing against spikier textures from the other instruments with the whole having a lovely transparency and airiness, combined with a very strong character. The CD booklet's notes refer to 'high jinx' and that is true, the piece has a light-hearted spirited feel, though in fact much of the musical material comes from Berkeley's anthem for the enthronement of Justin Welby as Archbishop of Canterbury.

This disc opens with Michael Berkeley's crisp, incisive and high-spirited Clarion Gall and Gallop (2013), written specially for this mixed ensemble (string quintet plus clarinet, bassoon and horn). Blue Medusa (2002) by John Casken celebrates the tonal possibilities of the bassoon by mixing myth and nature, Gorgon and vicious-tailed jellyfish. Howard Ferguson's Octet (1933) and Charles Wood's Septet (1889), both rewarding works from another era, merit the proper attention they are given on this imaginative disc.

On this, its debut release, the Berkeley Ensemble (whose members are drawn from the Southbank Sinfonia) gives warmly communicative and commendably polished readings, most truthfully recorded and balanced within an ideally intimate acoustic.

Into the Ravine - "beautiful sound and exquisite performances" 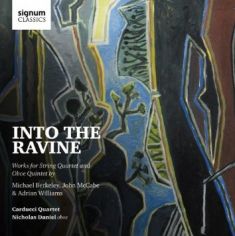 This attractive release from the wonderful Carducci Quartet includes a marvelous work by Michael Berkeley (son of Lennox), an oboe quintet subtitled Into the Ravine (after a painting by John Craxton). The plaintive work, in a decidedly post-tonal language, exploits the timbral possibilities in the combination of oboe with quartet or with individual string players and emphasizes long-breathed, lyrical melody that retains a thoroughly English cast while remaining resolutely modernistic.

McCabe's Seventh Quartet, written for the Carduccis, also reveals a fresh, light-as-air melodic idiom; and its thoroughly classical form is ingeniously designed. Adrian Williams's Fourth Quartet, first performed in 2009, is more rhapsodic and suggests a neoromantic orientation. The sound is beautiful and the performances exquisite.

Into the Ravine is available on Signum SIGCD350, released 09 December 2013